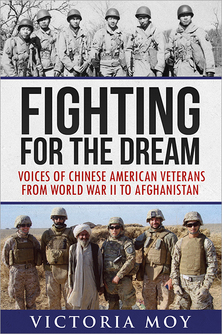 The collection also features the fascinating experiences of:

Victoria Moy was born and raised in New York’s Chinatown and currently lives in Los Angeles, where she is pursuing a MFA in Playwriting/Screenwriting/TV writing at the University of Southern California. She has written for Brooklyn Rail, Huffington Post, New York Press and other publications. She is a graduate of Yung Wing Public School 124, The Dalton School, and Dartmouth College. For more info, see: VictoriaMoy.net
Follow us on: https://www.facebook.com/fightingforthedream